This is a time to feel hopeful, not hopeless, about our global future.

If you look at the news, this may seem counterintuitive; right now, humanity is facing serious challenges that demand serious attention. But below the radar, there are rays of light shining through.

In 2000, at the dawn of a new millennium, world leaders and the United Nations created eight goals to reduce poverty and suffering by the end of 2015. These goals, called the Millennium Development Goals, or MDGs, gave governments, businesses, organizations, and people around the world a shared “to do” list, and alongside the UN, they got to action. For example, more than 400 partners have come together through the UN’s Every Woman Every Child movement to strengthen women’s and children’s health.

As world leaders gather at the UN this September to decide the next set of global goals, it’s a good time to look at the progress we have made under the MDGs. Each day over the next five days, we will share a fact and story about how the UN, the UN Foundation, and partners are driving #MDGmomentum for a better world.

While the facts cover a range of areas, they provide common lessons: Global goals work, and global action makes a difference.

Eleanor Roosevelt wrote, “Surely, in the light of history, it is more intelligent to hope rather than to fear, to try rather than not to try. For one thing we know beyond all doubt: Nothing has ever been achieved by the person who says, ‘It can’t be done.’”

Over the next week, we hope you will join us in sharing the message that building a better world can be done. In fact, we’ve already started. 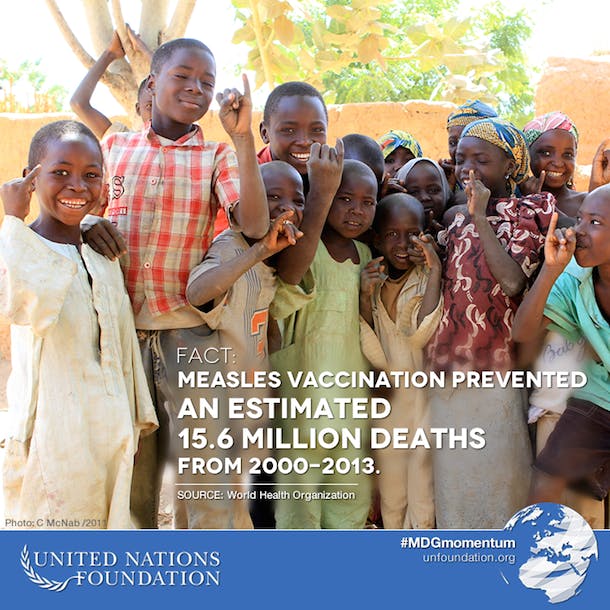 Since 1990, child deaths have been reduced by nearly 50%, and vaccines that protect children against deadly and preventable diseases are a huge part of the reason for this progress.

In 2001, the American Red Cross, the UN Foundation, the U.S. Centers for Disease Control and Prevention, UNICEF, and the World Health Organization (WHO) launched a global effort called the Measles Initiative (now the Measles & Rubella Initiative) to protect children against measles. Since then, with support from the partnership, 1.8 billion children have been vaccinated and measles deaths have been cut by 75%.

The takeaway is clear: Vaccines save lives. But we have more work to do – work that needs more resources – to reach the one in five children who does not have access to life-saving vaccines. On average, approximately 400 children die each day of measles – a number we can change if we expand access to vaccines and strengthen routine immunization.

Partners including the Measles & Rubella Initiative, the UN Foundation’s Shot@Life campaign, UN agencies, and others are on the frontlines of the fight against measles, and they need your support. Here is an example of how the UN is working to safeguard children against this deadly disease and continue building #MDGmomentum for a healthier world.

Last month, a Category 5 cyclone caused massive destruction across Vanuatu, an island nation in the South Pacific Ocean. The storm affected an estimated 166,000 people, leaving tens of thousands of people in need of shelter, clean water, and other essential needs.

Vanuatu has low rates of routine immunization and had already experienced a measles outbreak in early March.

Since disasters often increase the risk of outbreaks, UNICEF and WHO mobilized to aid the government’s emergency vaccination campaign, providing supplies, expertise, and people power to support the “10,000 in 10” campaign to vaccinate 10,000 children against measles and rubella in 10 days. Below are a few snapshots (with captions) of the effort, courtesy of UNICEF. 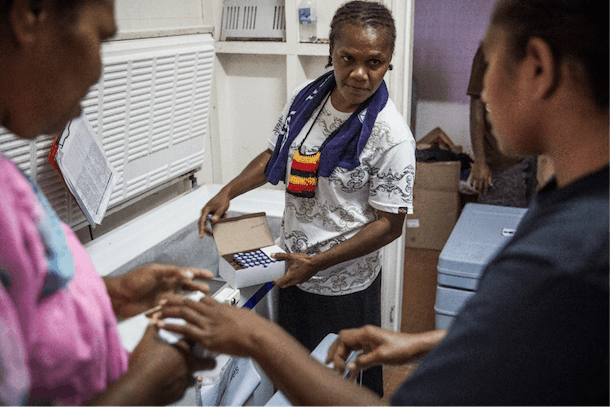 Health staff converse while packing vials of vaccines into insulated containers, in a UNICEF-supported facility in Port Vila, the capital, on the main island of Efate. Insulated containers are used to keep vaccines at a constant low temperature to maintain their potency. 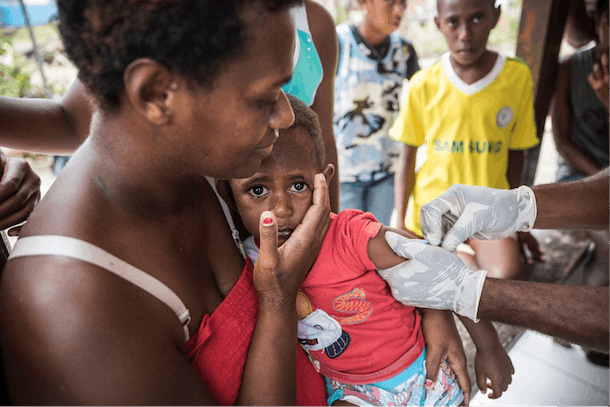 A woman holds a young girl who is being inoculated by a member of an immunization team that has come by boat from Port Vila, the capital, to vaccinate children on Ifira Island. 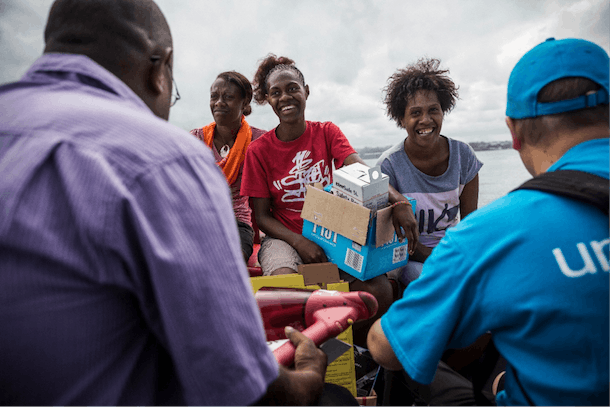 An immunization team, carrying vaccination supplies, travels by motor boat from Port Vila, the capital, on the main island of Efate. They are on their way to nearby Ifira Island to vaccinate children during the “10,000 in 10” immunization campaign. 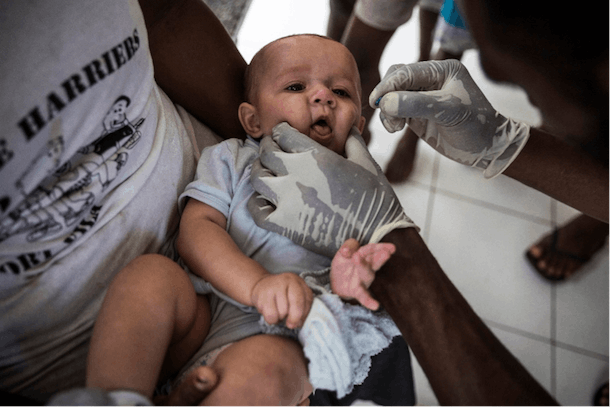 A baby lying in a woman’s lap receives a dose of vitamin A from a member of an immunization team that has come by boat from Port Vila, the capital, to vaccinate children on Ifira Island. Children are receiving vitamin A and deworming tablets during the “10,000 in 10” immunization campaign.