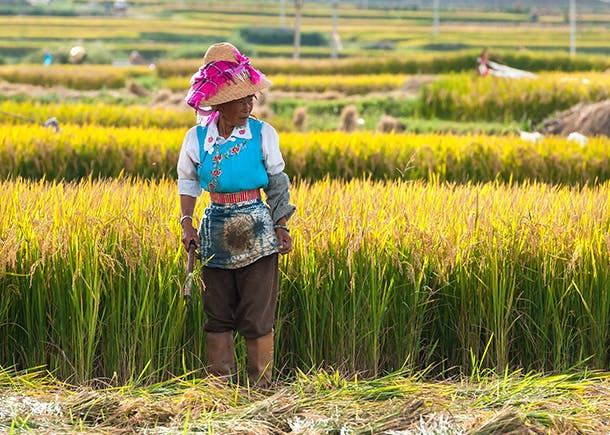 “Climate change presents the single biggest threat to development, and its widespread, unprecedented effects disproportionately burden the poorest and most vulnerable.” These stark words appeared in a recent United Nations report that assesses the world’s current standing and areas that need attention to spur future progress on the Sustainable Development Goals.

The Sustainable Development Goals, which were adopted last year by 193 world leaders, are a comprehensive and connected set of global goals to address social, economic, and environmental challenges and create a world without poverty and with opportunity for all by 2030. Strong action on climate change is one of the 17 goals; it’s also a goal without which all the other goals will not be met.

Here are four statistics that show why climate change threatens global development efforts and why we need strong climate action to create a world where every person can live with dignity:

Climate change could increase the risk of hunger and malnutrition by up to 20% by 2050.

Climate change is threatening to undo our progress in the fight against global poverty. A World Bank report that came out last year found that without necessary action, climate change could force more than 100 million people into extreme poverty, as they struggle with natural disasters, disease, and rising food prices from crop shortages.

An average of 211 million people were affected every year by natural disasters between 2000 and 2013.

Climate change is leading to more intense weather events, which are devastating people’s lives. The Sustainable Development Goals 2016 report notes that an average of 211 million people were affected annually as a result of natural disasters between 2000 and 2013. When disaster strikes, people often lose their homes and loved ones, and have a harder time getting health care, education, clean water, and the other services they need.

The effects of climate change – from polluted air to extreme heat to the spread of diseases – will have a significant negative impact on public health. According to the World Health Organization, “climate change is expected to cause approximately 250,000 additional deaths per year between 2030 and 2050; 38,000 due to heat exposure in elderly people, 48,000 due to diarrhea, 60,000 due to malaria, and 95,000 due to childhood undernutrition.”

While the statistics are sobering, there is reason for optimism: Taking strong climate action will not only help negate these impacts, but will also have significant sustainable development benefits – to improve health, create economic opportunities, and help families thrive.

For example, sustainable energy solutions such as solar and wind power connect people to the light and energy they need to more effectively study, cook, and run businesses, even while protecting the planet by reducing greenhouse gas emissions. As UN Secretary-General Ban Ki-moon says, “Saving our planet, lifting people out of poverty, advancing economic growth … these are one and the same fight.”

Last year, in addition to agreeing to Sustainable Development Goals, global leaders came together in Paris around an ambitious climate agreement. Now they need to implement it – for the sake of the planet and people living in poverty.

To learn more about the process to implement the Paris climate agreement, read this blog post.