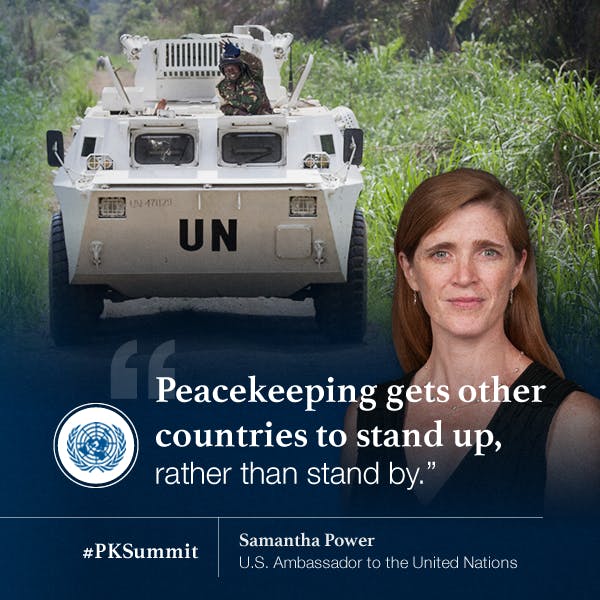 On Monday, September 28, U.S. President Barack Obama and other world leaders will convene at the United Nations to announce new contributions to the world’s largest deployed military force – UN Peacekeeping. It is a moment for the U.S. to show real leadership, beyond financial contributions, and it will go a long way toward achieving a sustainable and more effective partnership on peacekeeping.

What can we expect the President to say? Here’s a hint, based on what his top advisors have said in the run up to the summit.

1. “When we ask them to do more than ever, that is the peacekeepers, in even more difficult and more dangerous environments, we owe them more.  The result is that peacekeeping is under greater strain than it ever has been.” – Joe Biden, Vice President of the U.S.  (New York; September 26 ,2014)

2. “While we ask more of peacekeepers, we as a global community must strive to ensure that they possess the necessary training, tools, support, and resources to advance the cause of peace.” –  John Kerry, U.S. Secretary of State (Washington, D.C.; May 29, 2015)

3. The multilateral nature of peacekeeping helps address the free-rider problem we see today in so many matters of international security – from the spread of Ebola to the rise of ISIL to the recruitment of foreign terrorist fighters – whereby countries with vested interests in addressing threats rely on the United States’ to do the lion’s share of the work. Peacekeeping gets other countries to stand up, rather than stand by. – Samantha Power, U.S. Ambassador to the UN (Washington D.C.; November 7, 2014)

4. “Ultimately, the missions we collectively support serve a most noble cause – the greater good of humanity and protecting those who do not have the means nor the strength to protect themselves. We stand together in peacekeeping for the simple reason that it’s the right thing to do.” – General Martin E. Dempsey, Chairman of the Joint Chiefs of Staff (New York; July 28, 2015)

You can also follow the conversation online through the official hashtag #PKsummit, or by following @BetterWorldOrg, @USUN, and @UNPeacekeeping.