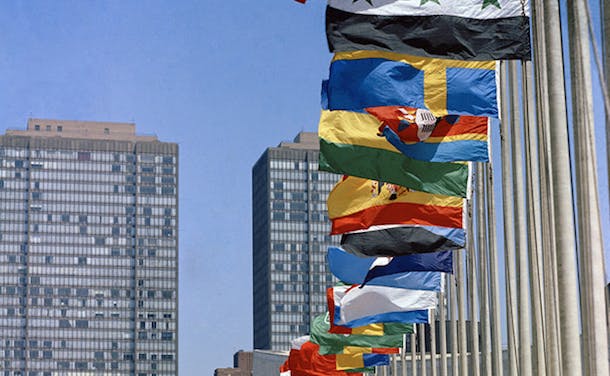 Editor’s Note: This post is the final post in a series on the founding of the United Nations 70 years ago. You can read the previous post here.

I’ve really enjoyed writing this series of blog posts on the founding of the United Nations over the past four months. The research has taken me down unexpected paths from New York Mayor Fiorello La Guardia’s little-known past as the head of a UN refugee agency to the legalese of ratification processes. Beyond the weekly digging into details, three major trends stood out to me about what we can learn from the founding of the United Nations.

First, the founding of the UN required flexibility. Compromise was not simple even between the fifty nations assembled at the San Francisco conference to create the UN Charter. Issues like the veto power were non-negotiable for countries like the Soviet Union and the United States.

But reaching an agreement on veto power meant allowing other nations like Canada and Australia to air their discontent. Finding common ground meant allowing dissent. Other problems like finding UN headquarters meant compromising on the location of New York, while leaving some agencies in Geneva.

The UN as a whole was a remarkably fluid organization at the start. It has stayed more flexible than we might think. The UN’s membership nearly tripled in the first 30 years from 51 members in 1945 to 144 in 1975. Newly decolonized nations joined along with European states like Ireland and even the United Nations’ enemies during World War II like Japan. The massively enlarged General Assembly meant new concerns and new challenges. It meant recalibrating processes of appeal, for example, to allow groups and peoples without a national membership to present their cases to the UN. To remain relevant, the UN had to remain flexible.

Second, the founding of the United Nations was a process, not a moment. The foundational document of the UN Charter took months to emerge. On June 26, 1945, the Charter was signed ceremoniously. When the Charter was officially ratified four months later on October 24, just over half the UN’s members had ratified the document. Only in late December 1945 had all original members ratified the Charter.

It took years to establish many fundamental agencies that we now associate with the UN. The World Health Organization only emerged in 1948 after various countries built on an initiative by the Chinese, Brazilian, and Norwegian delegates to San Francisco. UN headquarters in New York were only finished in 1952. Protocols and procedures arose slowly. The work of establishing an organization takes time. Processes are less glamorous than photo ops at ceremonies. But processes are the key to enacting policy.

Third, I was constantly struck by the importance of medium-sized nations. We tend to focus on the veto powers like the U.S., the Soviet Union, and Great Britain. We think about what they wanted and their sticking points. We investigate their attitudes to international organizations. We focus on U.S. leadership of the World Bank.

But many initiatives arose from others. Let’s take Canada as an example. The Food and Agriculture Organization was founded in Quebec City with strong Canadian support. The first Director-General of the WHO was Brock Chisholm, the former Canadian Surgeon-General. The Canadian lawyer John Humphrey directed the UN Human Rights Division. We associate the Universal Declaration of Human Rights with Eleanor Roosevelt, who chaired the drafting committee for the declaration. But Humphrey drafted the document itself. Humphrey’s words may be the most cited words ever written by a Canadian. We just forget that he was the person who wrote them.

Seventy years is a long time. There is much to commemorate. There is also much work to be done. But let’s not forget the lessons we can draw from the founding of the UN. We can remember member-states’ flexibility, willingness to compromise, and desire to enter into dialogue. We can remember that any reform is a process that requires time. We can remember that the members beyond the veto powers could fundamentally influence the UN from the start. On this seventieth anniversary, looking backwards can show us the path forwards.