With Election Day behind us, a group of newly elected Members of Congress will begin their preparations to take office on January 3, 2015. Before they start, we’d like to make sure they’re aware of the American public’s overwhelming support for the United Nations.

This new Congress will face some complex global challenges like Ebola, terrorism, and climate change. These threats, plus many others, will be front and center in 2015 and in the eyes of the American people, the UN serves as a key ally in addressing them.

Here are three key findings from a recent poll that every new Member of Congress needs to know:

1. 87% of Americans believe the U.S. should maintain an active role in the UN.Contrary to news reports that highlight growing isolationist sentiment, the American public values and prizes multilateralism. Voters recognize that the toughest global challenges require international collaboration. 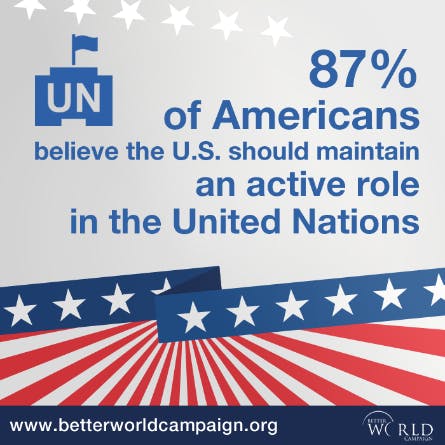 2. 72% of Americans support paying Peacekeeping dues on time and in full. A majority of Republicans, Independents, and Democrats also support the U.S. paying its share of UN bills. This will be important to keep in mind when the new Congress begins negotiations on the FY16 budget.

3. A resounding 89% of Americans believe it is essential for the World Health Organization and the Centers for Disease Control to work together in containing and resolving the Ebola outbreak.

With so many pressing international issues in front of Congress next year, it’s clear that the American public doesn’t want the U.S. to bear all the burden or go it alone. By working with the UN, we don’t have to.