2022 in Review: A Push for Global Health Progress As COVID-19 Focus Slips

2022 in Review: A Push for Global Health Progress As COVID-19 Focus Slips 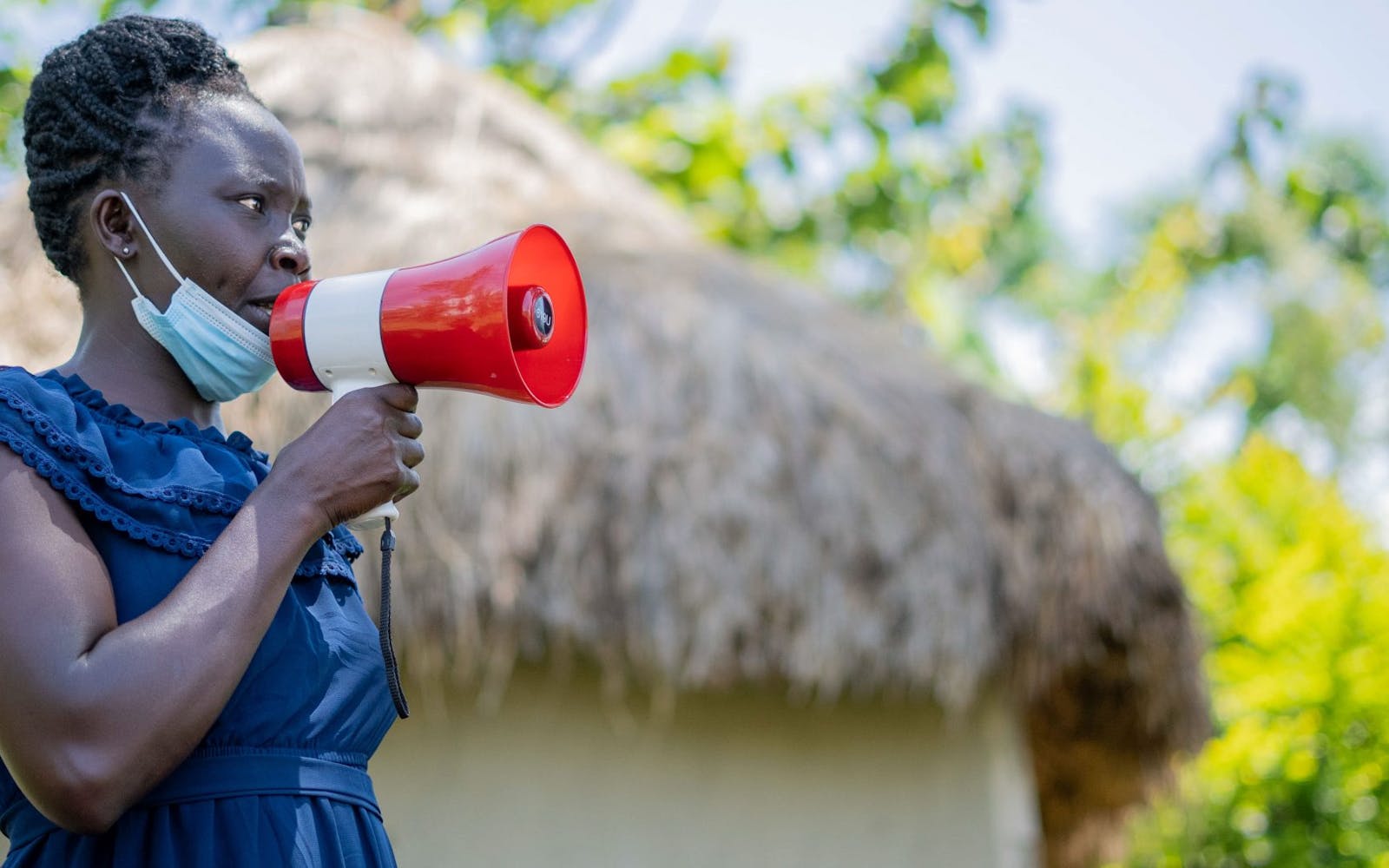 A mobilizer at a homestead in Uganda encourages mothers and caregivers in the community to gather for monthly immunization outreach. Photo: UNICEF/Zahara Abdul

2022 began with the largest global surge in COVID-19 cases since the start of the pandemic, spurred by the spread of the Omicron variant. Despite rising cases as we head toward the end of the calendar year, the aperture of focus in global health has widened beyond COVID-19, to enhancing the resilience of health systems to restore progress on the health-related Sustainable Development Goals and mitigate the effects of future pandemic threats. Will 2023 bring new global health progress, or will the world recede further in delivering the promise of Health for All?

Last fall the Omicron variant of SARS-CoV-2 was on its way to dominating the trajectory of the pandemic. Although COVID-19 vaccines had been widely available in high-income countries since mid-2021, the vast inequality of vaccine access was highly problematic. For instance, less than 10% of health care workers in Africa were vaccinated by the start of 2022. While COVAX — the UN-led global partnership to accelerate equitable access to COVID-19 vaccines — helped bend the curve and ensure that over 68% of the world population received a vaccine by December 2022, it was not enough. Only a quarter of people in low-income countries have received at least one dose, and lives were needlessly lost. That prompted many people to decry the dissonance between political leaders’ rhetoric and their decisions, and many, especially populations in lower-income countries, to feel disillusioned about a level playing field. 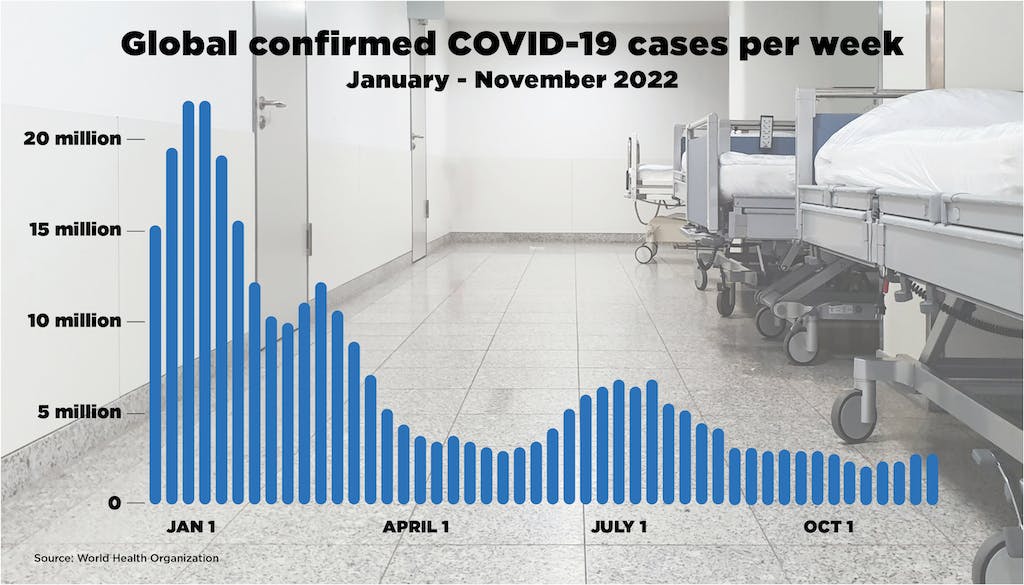 Global solidarity was challenged in several other ways this year, including by Russia’s attack on Ukraine and the food, fuel, and increasing fiscal crises it spawned. Although COVID-19 cases declined through much of 2022, due to combined natural and vaccine-induced immunity, cases once again peaked in November in Australia, China, France, the United States, and elsewhere. By the end of this year, political attention and resources to stop the disease, which has now killed more than 6.6 million people worldwide, have waned considerably. Epidemiologists and others are watching China carefully as it lifts its longstanding “zero-COVID” strategy, which holds unknown risks for potential future epidemiological shifts for the rest of the world.

Although the COVID-19 pandemic has become less threatening in the global public consciousness, its impacts are still being deeply felt. It has exacerbated inequality within and between countries, eroded global solidarity and trust, and caused dramatic backsliding on key health outcomes due to disrupted access to essential health services. Despite the lessons learned from this pandemic, gaps in outbreak preparedness and response remain widespread, as evidenced by the global spread of mpox earlier this year and numerous epidemics of polio, measles, and other vaccine-preventable diseases in previously controlled areas. Thankfully, leaders are recognizing the need for increased international cooperation on health matters and to initiate changes in this direction. 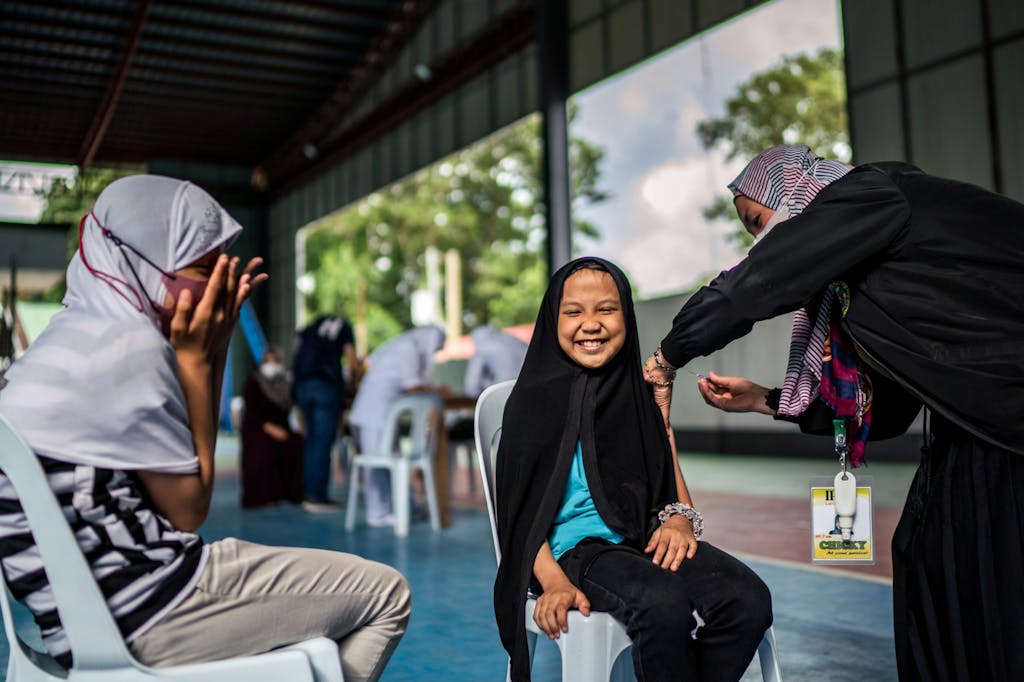 An SDG “SOS” and call to accelerate global health progress

In September 2022, at the annual opening of the UN General Assembly in New York, Secretary-General António Guterres cautioned that we are in a global “SOS” on the Sustainable Development Goals. With the world moving at only one-quarter of the pace needed to reach the health-related SDGs by 2030, the need to accelerate progress is growing more urgent.

Two examples show the effect of the pandemic on hard-won health gains.

The World Malaria Report, released in early December, shows that disruptions during the pandemic and converging humanitarian crises, health system challenges, restricted funding, rising biological threats, and a decline in the effectiveness of core disease-fighting tools (due to insecticide resistance, changing mosquito behavior, and other factors) threaten the global response to malaria. And while, according to the World Health Organization (WHO), countries have worked hard to hold the line against further setbacks to malaria prevention, testing, and treatment during the pandemic, the recently released data still shows malaria infections and deaths were higher in 2021 than pre-pandemic levels. 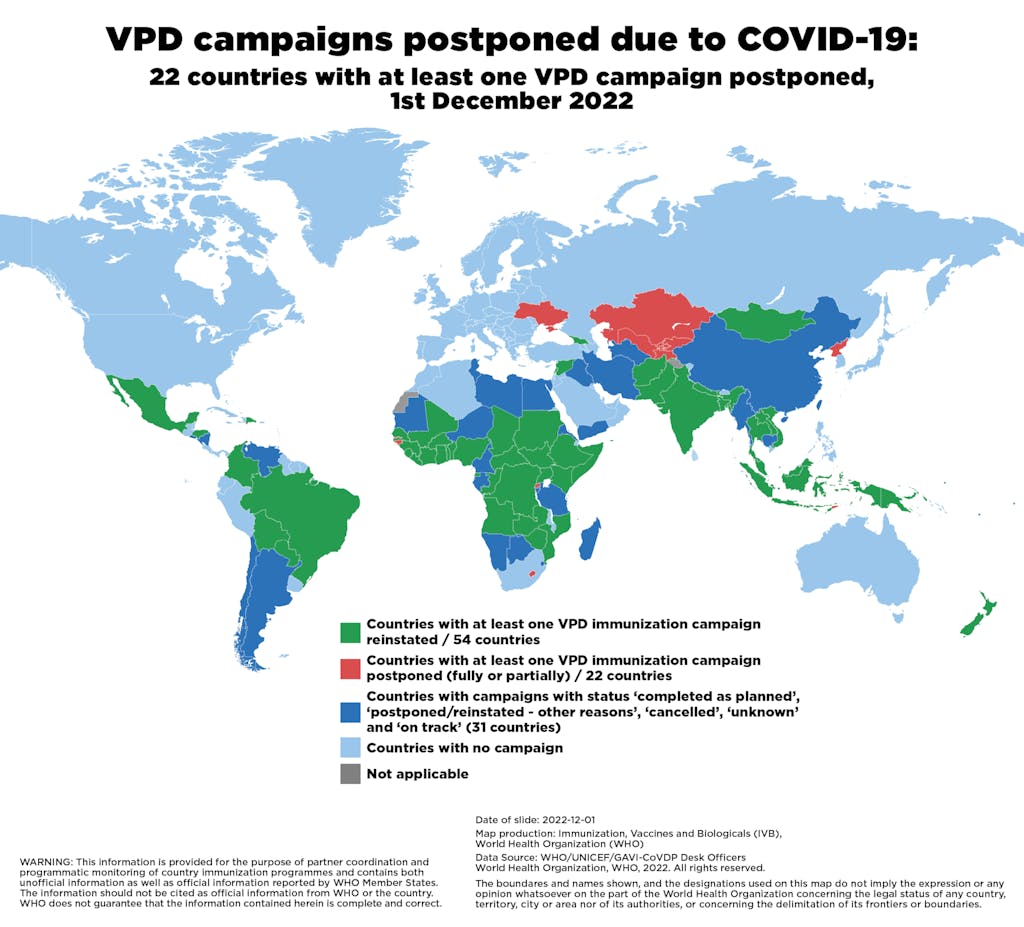 One of the most notable, and worrying, impacts of the pandemic has been the drastic drop in routine childhood immunization rates worldwide. In 2021, the world experienced the largest sustained decline in childhood vaccinations in approximately 30 years, according to data released by WHO and the United Nations Children’s Fund (UNICEF) this summer. Twenty-six vaccine-preventable disease (VPD) immunization campaigns in 22 countries have been postponed over the course of the pandemic, according to provisional data.

As childhood vaccination rates have dropped, outbreaks of VPDs have spread around the globe. In the first 11 months of 2022, reported measles cases have more than doubled over the same period in 2021, according to provisional data. Also in 2022, polio was detected in areas previously certified polio-free — with cVDPV2 found in the U.S., UK, and Israel and wild polio virus found in Malawi and Mozambique. 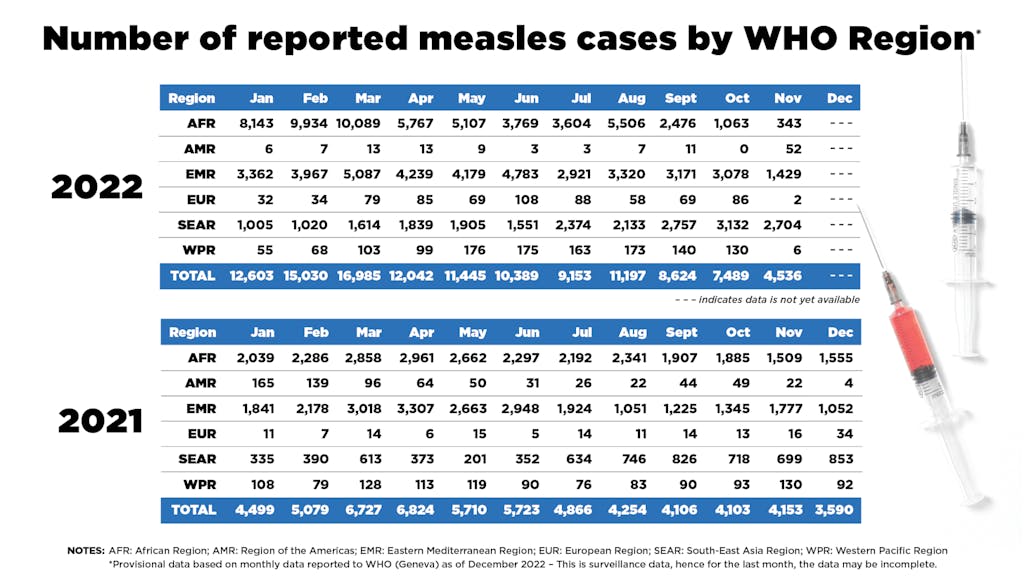 Despite headwinds, glimmers of progress for global health

In the face of significant geopolitical headwinds intensified by a multiplicity of crises this year — COVID-19, conflict, other disease outbreaks, and climate change — we did see some promising signs of renewal and recommitment to multilateralism. Among them:

Encouragingly, these developments and others brought key themes into the foreground: re-centering and accelerating efforts to address equity and enhancing resilience of health care systems, especially primary care as a prerequisite to achieve health goals and safeguard against crises and shocks. 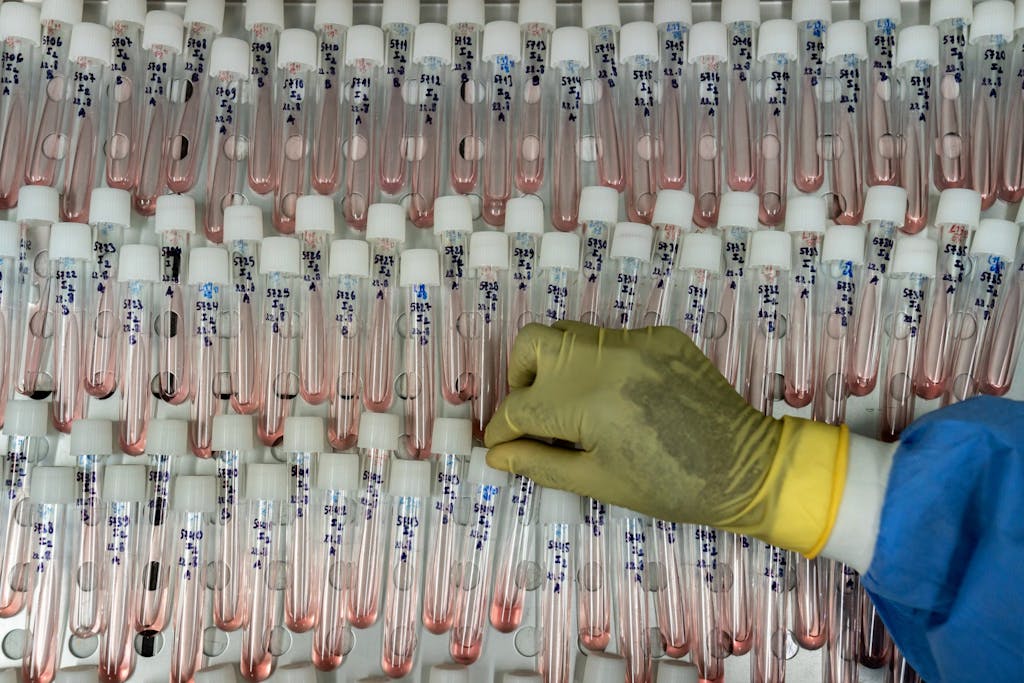 Looking ahead to a high-stakes 2023

While the COVID-19 pandemic is not over, as we mark the midway point for the SDGs, the focus in 2023 must be on accelerating equitable, scaled solutions for resilient health systems at community, country, and global levels. Several high-stakes moments on the next year’s agenda will set the course for the next phase in the global recovery and whether we can get the SDGs back on track.

Perhaps most significantly, three high-level meetings on health-related topics are planned to take place in New York next fall alongside the SDG Summit at which world leaders, both within and outside the health sector, will discuss tuberculosis, universal health coverage, and pandemic preparedness and response. This unprecedented triple billing of health meetings underscores Member States’ commitment to using the UN General Assembly as a forum to demonstrate political will toward solving complex health issues.

Member States are already in the early stages of strategizing on how to leverage this unique moment to drive ambition for solutions toward all three issues: reorienting efforts toward strengthening primary health care and the health workforce are surfacing as areas of convergence. That the high-level meetings are occurring alongside the SDG Summit is notable as well. Because the summit marks the midway point for the SDGs, it will include a comprehensive review of our progress — or lack thereof.

While there will be considerable energy surrounding health issues in New York in 2023, Geneva will be as active as ever, with negotiations underway for both the Member State Working Group on Amendments to the International Health Regulations and the Intergovernmental Negotiating Body for a new pandemic accord. The international legal agreements that will emerge from these parallel processes in May 2024 have the potential to transform the way the world collectively responds to pandemic threats. It remains to be seen, however, if Member States will marshal sufficient collective ambition and alignment to agree on transformative measures.

Of course, efforts in New York or Geneva gain traction only when they build on, and reinforce, country-level progress. On Dec. 10, WHO’s Dr. Tedros announced at the Forum on Immunization and Polio Eradication in Africa that “One of WHO’s top priorities for next year is supporting countries to catch up, restore and strengthen immunization services to get back on track to achieve the goals of Immunization Agenda 2030.” With the global rise in vaccine hesitancy and the spread of vaccine-preventable diseases in all corners of the world, all countries must redouble their efforts to ensure no child misses essential vaccines. Immunization Agenda 2030 has identified 20 countries where extra support is most needed. From 2019 to 2022, it is estimated that more than 50 million children missed vaccines in the 20 countries. By focusing on these countries, there is the opportunity to reach 78% of “zero-dose children” (i.e., those children who have never received any vaccines).

All of these initiatives in 2023 are part of a bigger effort to ensure that health systems at all levels — local, national, regional, and international — can address the aftermath of the past three years. Now is our chance to turn the tragic losses and hard-earned lessons of COVID-19 into concrete action, not just for our own sake, but also for the safety and well-being of future generations.