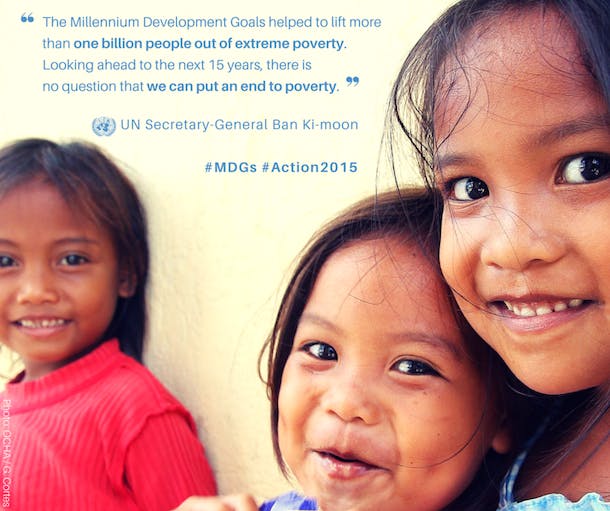 It’s been a year of conflict and challenge, but there is also reason for hope that a better world is possible. In fact, there are several reasons, and we want to share 11 of them.

Today marks the end date of the Millennium Development Goals (MDGs). At the dawn of a new millennium in 2000, world leaders and the United Nations created eight goals to alleviate poverty and improve lives around the world by the end of 2015. Tomorrow the world launches the next set of goals, known as the Sustainable Development Goals, which build on the MDGs and go further to not only end poverty, but promote opportunity for all by comprehensively addressing social, economic, and environmental challenges.

As we prepare for the future, it’s also important to look back and learn. Under the MDGs, we made incredible progress on many challenges, but we didn’t meet all of our goals, and we still have a lot of work to do to make sure no one is left behind.

The main lesson is clear though: When we come together and act with the UN, we can make a difference. Here are 11 highlights of global progress to inspire us to continue working as we head into a new era of sustainable development.