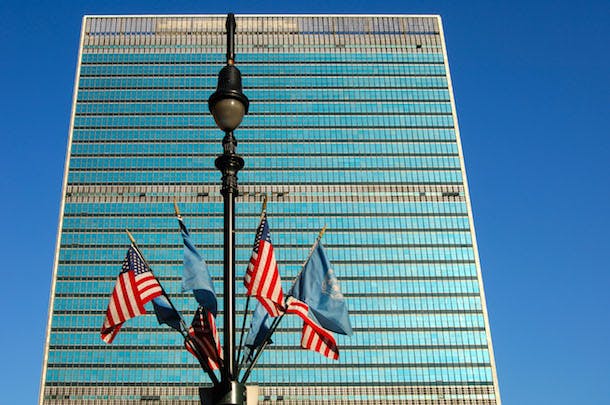 On Tuesday, September 19, President Trump will speak at the 72nd United Nations General Assembly (often called “UNGA”) before almost 100 Heads of State – a marquee moment that could be dubbed the United States’ press conference to the world. This will be the first-ever appearance at the annual UNGA in New York City for President Trump, Secretary Tillerson, and Ambassador Haley.

Major U.S. foreign policy priorities will undoubtedly be weaved into the President’s speech, whether it’s responding to the growing nuclear threat of North Korea, the spread of ISIS in the Middle East, the ongoing human rights violations in Venezuela, or the growing number of people facing the threat of famine. However, this will also be a pivotal moment for the President to express his vision for the future of the UN as a leading international institution.

What are a few key themes we can expect from the Trump Administration’s first UNGA? Here are a few possibilities:

1. Other countries must step up.

“You see the way I’m talking about NATO, … we need the member states to come together to eliminate inefficiency and bloat, and to ensure that no one nation shoulders a disproportionate share of the burden militarily or financially.“

The UN gives the U.S. a platform to ensure the rest of the world is standing up, not standing by. In fact, the UN’s assessed, mandatory contribution system allows the U.S. government to share the financial burden of responding to challenges with other countries, avoiding the “free rider” problem the U.S. has experienced with NATO defense spending.  Peacekeeping is great example with more than 100 other nations, including dozens of strong U.S. allies, providing the troops and police that serve on these missions, which means we don’t have to send American soldiers into harm’s way.

The U.S. cannot afford to confront the globe’s threats and military crises by ourselves, and working through the UN means America doesn’t have to do bear the whole burden of the world.

2. Reforms are needed at the UN.

“For the United Nations to play an effective role in solving these and other security challenges, big reforms will be required.… If we do a great job, I care much less about the budget, because you’re talking about peanuts compared to the important work you’re doing.”

To meet the complex crises under its purview, the UN needs to reform its operations and management practices. This is a top priority of UN Secretary-General Antonio Guterres, who has been working in close partnership with U.S. Ambassador to the UN Nikki Haley on advancing important reforms at the UN. Their efforts will be put on display on Monday, September 18, at an event on UN Reform where President Trump, Ambassador Haley, and Secretary-General Guterres will all provide brief remarks.  In fact, the 10-point political declaration disseminated by the United States, which is the basis for the September 18 event, declares its “confidence in the Secretary-General reform initiatives” and encourages other Member States to support his agenda.

3. The UN has great potential

“I also want to say to you that I have long felt the United Nations is an underperformer but has tremendous potential.”

The United Nations is actively making the world a better, more peaceful place. This is backed up by research.

As written in the United Nations Charter, the organization’s first core responsibility is “to save succeeding generations from the scourge of war.” New research, based on 66 years of data from experts at Dartmouth and Ohio State University, has shown that the UN promotes peace.

According to one of the researchers, “While the UN obviously does not prevent all armed conflict…our analysis provides evidence that the UN is more than just a witness of changing policy preferences, the world body impacts future decisions, particularly by suppressing conflict.

Additionally, research has found that the presence of UN Peacekeepers has been shown reduce the chances a country will return to war by 50 percent. And every day, the UN is on the front lines of helping people in need, providing food, shelter, and medicine – often in places where others won’t go.

Want to get involved ahead of the 72nd UN General Assembly? Here’s what you can do: