10 Facts to Remind Us that Global Action Matters

10 Facts to Remind Us that Global Action Matters 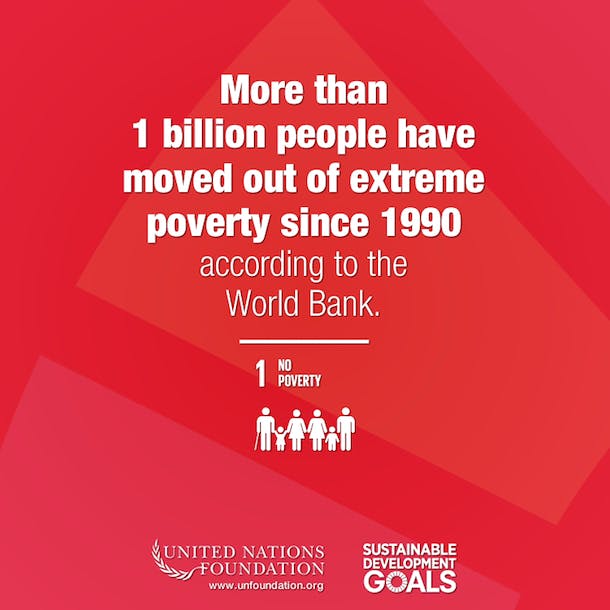 Reading our newsfeeds and learning about tragedies unfolding around the world has left many people feeling hopeless. As someone who works on international issues, many people have reached out to me to share their dismay about the world.

And while there are no simple answers to the conflict, violence, and inequality we’re grappling with today, I tell them my belief: That giving up is not the answer.

We have serious global challenges, and on many of them, we’re not doing enough.

But if you look at the facts, in many areas, the world is getting better. That’s because people, governments, companies, civil society groups, and others have taken action alongside the United Nations to drive progress on issues from reducing poverty to improving children’s health.

The lesson we should take from these facts is clear: In an era of challenge, progress doesn’t happen by accident; it happens because of action. Positive change is never a given, but we can create it if we can come together with common purpose. It will not be easy, but we know for sure it won’t happen if we sit back.

Here are 10 facts to inspire collective action for a more just and equal world.

2. Measles vaccination saved an estimated 20 million lives since 2000 according to the World Health Organization. By increasing the percentage of children immunized against measles, there has been a 79% decrease in measles deaths from 2000-2015.

3. The International Energy Agency reports that annual renewable electricity capacity reached a record level in 2015 of 153 gigawatts. The agency notes that renewables, including wind and solar, accounted for more than half of the new power capacity added around the world.

4. Malaria deaths have decreased by 71% among children under 5 in Africa since 2000 according to the World Health Organization. Improvements in preventing and treating malaria, including insecticide-treated bed nets, have helped save an estimated 6.2 million lives since 2000.

5. More than 300 million women and girls in the world’s 69 poorest countries are using modern contraception according to Family Planning 2020 (FP2020). This is a new milestone, which has a real-world impact. As FP2020 notes, “It represents an unprecedented number of women and girls who are now able to take charge of their own health and shape their own lives and families.”

7. Maternal deaths decreased by about 44% between 1990 to 2015 according to the World Health Organization. Most maternal deaths are preventable, and by expanding access to quality health services, among other steps, we can save women’s lives.

9. According to UNESCO, the number of children and adolescents who were out of school has fallen by almost half since 2000. Expanding access to education has helped tens of millions of additional children go to school.

10. In 2015, over 90% of the world’s population used an improved source of drinking water, compared to 82% in 2000 according to the UN. This means most of the world is drinking safer water.

More progress is needed on these issues, and in many cases, progress needs to be happening much faster than its current pace. But I’m encouraged that change is happening, and now is the time to come together and build momentum by working with the UN. We’re thankful to the fearless people who make it happen. We hope you will join this movement and stand up for a better world. Sign up to join us.