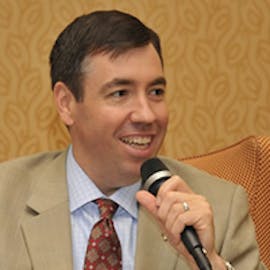 Patrick Madden was named Executive Director of the United Nations Association of the United States of America in February 2011. Before assuming the UNA position, Madden served as President null; CEO of Sister Cities International (SCI) for four years, building a network of U.S. cities partnered with more than 2,000 international communities that worked to implement economic development, humanitarian, cultural, and education programs and exchanges. During his time at SCI he was responsible for attracting the organizationnull;s largest grant, a $7.5M donation from the Bill null; Melinda Gates Foundation to work on urban poverty issues in Africa. He enhanced the profile of SCI and thousands of local elected official and community leaders by representing the organization at national and international events, traveling to more than a dozen countries. Before SCI, he served in senior level external affairs positions at the Association of Performing Arts Presenters and the Smithsonian Institutionnull;s National Portrait Gallery. In both positions he worked on a variety of international projects and exhibitions, as well as immigration matters urging U.S. Congress and federal agencies for visa policy reforms. Madden is an adjunct faculty member at George Mason University where he teaches graduate seminars in fundraising. He holds two degrees from Ohio University. Fun fact: Patrick has walked on The Great Wall of China, biked around Amsterdam, toured the Hermitage and Louvre (not on the same day!), stood at the foot of the Great Pyramid, lunched with traditional rulers in Accra, explored street markets in Lima, and discussed politics with city council members in Kuwait City. Five continents down and two to go.

3D Printing For Good: How One Nonprofit Is “Printing” Homes For Families In Need