Older generations often complain that young people have lost the art of letter-writing, but at just 10 years old, Abner of Portland, Oregon, has written more letters than most people have written in their lifetimes.

Abner has written over 100 letters to elected officials about the biggest threat facing his generation: the climate crisis. Since starting his letter writing campaign in December 2018, Abner has written every single governor in the United States about joining the U.S. Climate Alliance, a bipartisan group of governors dedicated to meeting the targets of the Paris Agreement on climate change. Although the federal government is rolling back progress on climate action, U.S. states are stepping up to create clean energy jobs, reduce emissions, and make communities more healthy and resilient. The alliance now represents 24 states and Puerto Rico, over half of the U.S. population, and more than $11 trillion in GDP.

We interviewed Abner as part of our Protectors of Progress series, which highlights the stories of everyday individuals across the globe who are stepping up in their communities to help realize the promise of the Sustainable Development Goals (SDGs), a global roadmap for the future adopted by all UN member states in 2015. While there is a lot of work to be done to achieve the SDGs, advocates like Abner show that it’s possible to protect — and advance — progress when we take action.

What grade are you going into? What’s your favorite subject in school?

I’m going to be in the fifth grade, and math is my favorite subject.

Do you like to be in the outdoors? Tell us about your favorite places in nature. 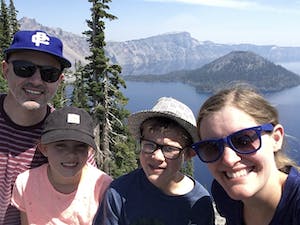 How did you first learn about climate change? And how did it make you feel?

Well, I had known about it for a while. I was possibly 8-years-old when I first learned about it.  I go to the library a lot, and I got books about it. Reading about it made me feel scared — like something needed to be changed. Later, I made a sign that said “There’s no Planet B” for a climate march that I went to with my mom and sister in 2017.

How did you first learn about the U.S. Climate Alliance?

So when I started writing letters, I was writing thank yous to governors in the We Are Still In group, and then when I was looking at that list we found another list and that was the U.S. Climate Alliance. So I wrote to all those people too.

The book that I read that inspired me to start writing letters was “Start Now” by Chelsea Clinton.

Do you remember the first letter that you wrote? Did you expect a response?

Well, the first time I wrote, I was actually writing Governor Kate Brown of Oregon and the director of the Oregon Department of Energy. And I didn’t actually really expect a response, but I got one on December 20th — about seven days after!

So far, 14 elected officials have written back to me. 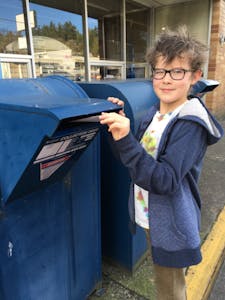 How many letters you’ve written so far?

That’s more letters I feel like then people write in their lifetimes nowadays! What do you write to people who have not signed on to the U.S. Climate Alliance?

I write to tell them about climate change and tell them that something needs to be done. I think that everyone needs to work together to lower emissions at a steady rate, and we all need to change actions in our daily lives so that we become more energy efficient.

And what do you say in the letters to governors who have joined the U.S. Climate Alliance?

I thank them for being in the U.S. Climate Alliance. Right now, I am writing the presidential candidates about the climate debate and climate action.

Tell us about the drawings that you put in your letters. 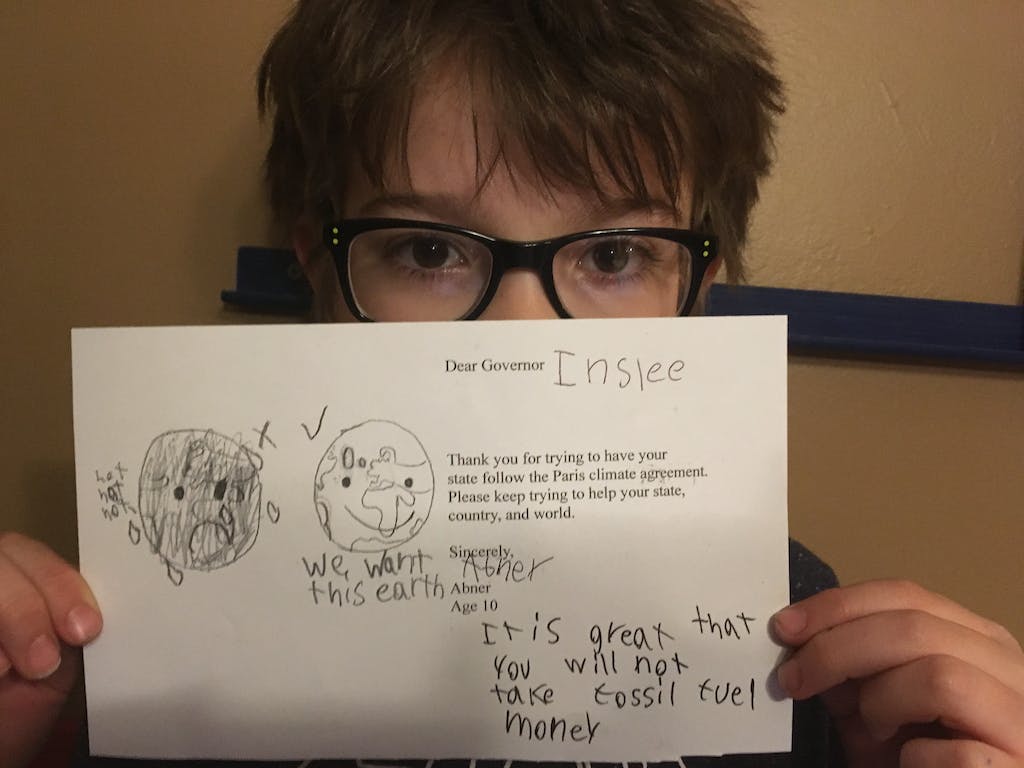 How did you feel when you saw that Montana joined the U.S. Climate Alliance in June? Do you remember what you wrote in your letter to Governor Bullock?

I was happy because I didn’t think anyone else was going to join. I wrote a letter that said:

I am wanting to alert you about climate change. It does many things to our planet and it is important that you stand up to protect our planet and future generations. Climate change melts our arctic ice which raises our sea levels, it makes our storms more extreme, it also threatens life to many animals, and it does much, much, more. We need you to act on the problem of climate change. You can act by cutting emissions, joining the USCA, changing to renewable energy, and much more.

I received a reply from Governor Bullock regarding climate change. I get excited when receive a reply.

You’ve also attended the Youth Climate Strikes. Why did you decide to join them? 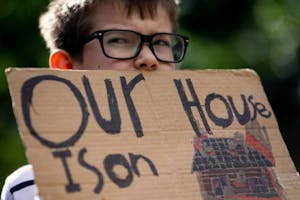 I went to those because I knew it was another way to get people to realize that we need to do something.

What actions are you taking in your daily life to reduce your carbon footprint?

I reuse many things (like cardboard and other materials that can be used to make things). I also reuse water cups and clothing to save the energy it takes to wash them. I help recycle stuff too.

What do you say to people who don’t think that their voices or their individual actions will make a difference?

Their actions will make a difference one way or another.

Do you live in the U.S.? Write to your governor about the U.S. Climate Alliance.

Want to take climate action in your daily life? Take part in the UN’s ActNow campaign.