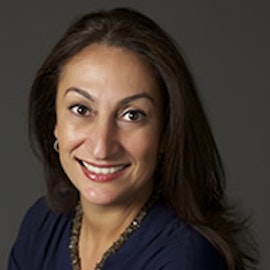 Born in Iraq, raised in Jordan, and educated in England, Zain Habboo now calls Washington, D.C., home. Zain Habboo served as the Senior Director for Digital and Multimedia Strategy at the United Nations Foundation until June 2017. Her team's ambitious mission—to engage citizens around the globe with the lifesaving work of the United Nations—has resulted in the creation of viral memes (the #unselfie, #giveagif and more) and social media innovations (#Instacorps), as well as a leadership position in groundbreaking convergences such as the Social Good Summit, and much more. Zain very quickly became known for her creative and strategic force behind “Digital Surge Days,” such as a day of programming around the International Day of Happiness in partnership with the artist Pharrell Williams, and marquee UN-related days such as Momentum 1000 and MDG500. Since joining the UN Foundation her team has won PR awards for best team almost annually, and Zain herself was awarded the New York Women in Communications "WiCi Award" in 2014. Prior to joining the United Nations Foundation, Zain spent 14 years at National Geographic, first in the magazine’s prestigious photo editing department. She was tapped by senior executives to help launch and steer the society's nascent digital presence into an award-winning Internet standout. Zain serves on the board of the Petra National Foundation, the sister organization of the Petra National Trust in Jordan. She is an active member of the young professional Jordanian community in Washington, D.C. Zain also serves as a member of the Children’s National Medical Center’s “Scientific Advisory Council”. She lives in Chevy Chase, Maryland, with her husband and son.