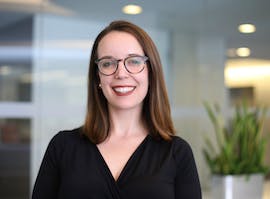 Melissa Toufanian is a senior policy analyst with the Climate in Foreign Policy Project, an initiative aimed at better integrating climate change into broader foreign policy and national security conversations. Previously, Melissa served as communications director for Rep. Antonio Delgado (NY-19) during his 2018 campaign and first term on Capitol Hill. From 2011-2017, Melissa served in the U.S. Department of State’s Office of the Spokesperson with a focus on the Secretary’s international press engagement. In that role, Melissa was responsible for coordinating public diplomacy events and communicating U.S. foreign policy on digital platforms. She accompanied the Secretary and State Department Spokesperson on official travel to more than 70 countries. Melissa also served in the Bureau of Population, Refugees, and Migration, focusing on research and public outreach related to refugee issues. Prior to her time at the State Department, Melissa completed a reporting fellowship in South Africa for the Pulitzer Center on Crisis Reporting. Melissa holds a Master of Science in Foreign Service (MSFS) from Georgetown University and a bachelor’s degree in journalism from George Washington University.