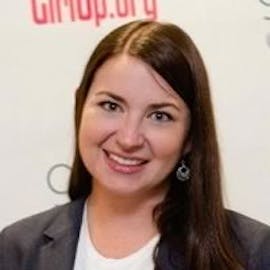 Melissa Hillebrenner is Director of Girl Up— an innovative campaign of the United Nations Foundation that works to build and maintain a constituency dedicated to improving the lives of the world’s hardest-to-reach girls. The campaign mobilizes the general public to raise funds and awareness for United Nations programs that serve adolescent girls growing up in developing countries. Through Girl Up’s support, these girls will have the opportunity to become educated, healthy, safe, counted and positioned to be the next generation of leaders. As the Director of Girl Up, Melissa leads a campaign that empowers people to advocate on behalf of girls around the world through online engagement and community mobilization. Through its teen advisory board, network of Girl Up Clubs, and online constituents, Girl Up has galvanized hundreds of thousands of supporters to stand up for the rights of girls everywhere. Prior to becoming Director of Girl Up, Melissa served as Deputy Director of the campaign. During the two and a half years that she helped lead Girl Up, the campaign has grown to more than 360,000 constituents and more than 500 Girl Up Clubs around the world. Before joining the UN Foundation, Melissa served as a National Director for OP3, where she managed the nine-city multi-day fundraising walk series benefiting the Avon Foundation for Women, which raised an average of $45 million each season. During her tenure with the Avon Walks, she oversaw national staff and remote field teams, and introduced a program called the Youth Crew, which targets youth ages 10-16 to participate in the walk and raise money for the Avon Foundation. Melissa holds a Bachelor of Journalism in Strategic Communication from University of Missouri – Columbia. Previous experience includes working with donor relations and marketing for Hinsdale Hospital and the American Red Cross.

Stand Up for Education for Girls in Vulnerable Settings

Finding the Leader in Every Girl, Everywhere

A Big Step to Stop Child Marriage in Malawi

Every Child Deserves Opportunity From Day One