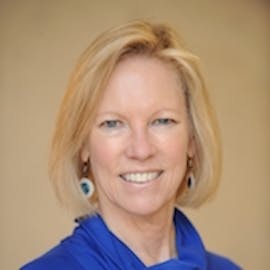 Kathy Calvin is the President and Chief Executive Officer of the United Nations Foundation. Her career started after she graduated from Purdue University with a degree in speech therapy. She quickly decided that she was not patient enough for speech and hearing therapy and that she would prefer a career that provided more immediate feedback. Calvin soon moved to Washington, D.C. and worked as a researcher and editor before becoming the press secretary of Senator Gary Hart; a job she knew nothing about but excelled at due to her ability to translate big issues into stories that people care about. She then moved on to become the Director of Editorial Administration at U.S. News and World Report where she stayed for 12 years before joining Hill and Knowlton as the Senior Managing Director in charge of leading the U.S. Media Relations practice. In 1997, Calvin became the Senior Vice President and Chief Communications Officer of American Online and was soon promoted to President of the AOL Time Warner Foundation. It was here that she learned to approach work as a marathon, not a sprint. While at AOL she guided AOL Time Warner's philanthropic activities and was the chief architect of the company's corporate responsibility initiatives. She has been with the UN Foundation since 2003 and currently serves on the board of Internews. Fun fact about Kathy Calvin: She enjoys taking long rides on the back of her husband's motorcycle.

The Time is Now to Accelerate Momentum on Family Planning

In a Time of Record Need, We Must Do More to Stand with Refugees

Why 2018 Must Be a Year of Action Against Tuberculosis

A Need We Can No Longer Ignore: Family Planning in Humanitarian Emergencies

How a Factory in Tanzania is Saving Lives and Boosting Economies

The Change We Need to Make to Achieve a Sustainable Future: Thinking Beyond Issues and Sectors to People