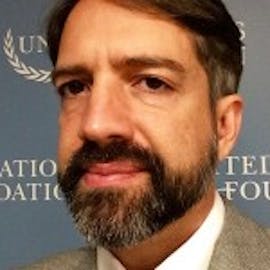 Jay Corless is Senior Director for Innovation at the UN Foundation. In this position he seeks to identify, showcase, and scale innovations that deliver impact on international development goals. His professional work spans two decades within the UN System and the private sector. He has broad work experience in communication, online technologies, cultural diplomacy, design innovations, policy development, and project management. At UNESCO, in 1995, he launched the organization’s first generation website, oversaw the deployment of the agency’s first content management system, and developed both the internal and external communication strategies for the agency. In 2002, he devised the organization’s U.S. re-entry public information campaign. The successful campaign contributed to the U.S. Government’s decision to rejoin UNESCO after an 18-year absence. On U.S. re-entry, he joined the Office of the Spokesperson to then Director-General Koïchiro Matsuura. He also coordinated two United Nations Pavilions at the World Expos of 1998 and 2005. After a 13-year career with UNESCO, Jay decided to leave the organization determined to find new ways to address global development challenges. His research led to an M.A. from London’s University of the Arts. After his studies, he held management and development roles with the London Design Festival, Design Miami, and Design Philadelphia. He also filmed, edited and authored an online documentary on the role of design in shaping the future of American cities entitled Cities x Design. More recently he has contributed to UN publications on policy design, project design and the Creative Economy.

Local Entrepreneurs Leading the Way on the Sustainable Development Goals

Innovation to Advance the Global Goals: Join the Solutions Summit