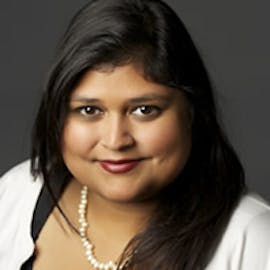 Currently, Chandrima serves as the Better World Campaign’s resident expert on peace and security issues, including the 15 UN peacekeeping operations on 4 continents. Her work includes educating Congress and the Administration on the value of UN peacekeeping as an effective part of America’s national security toolbox. She spearheads BWC’s annual Thank A Peacekeeper advocacy campaign, which has demonstrated support for UN peacekeeping from over 75,000 grassroots advocates throughout the United States. In addition, she is the lead author of policy papers on the use of unarmed Unmanned Aerial Vehicles (UAVs) by UN peacekeeping and the funding crisis for UN peacekeepers in Mali. Before joining BWC, Chandrima worked at the United States Institute of Peace as a consultant and research assistant writing training curriculums on negotiation, mediation, and conflict resolution. Her training curriculums were used to train local government officials in Iraq and Sudan. She has also worked for CHF International in South Sudan on basic services programs and combating gender-based violence. During her graduate study at George Mason University, Chandrima was a research assistant for the Terrorism, Transnational Crime &amp; Corruption Center, looking at human and arms trafficking routes. Chandrima holds a master's degree in Peace Operations. She received her bachelor's in Political Science from Syracuse University.

U.S. Leadership at the UN Secures a Win for the People of South Sudan