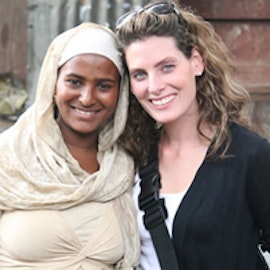 In September of 2003 Amy joined the UN Foundation and now works as Director for UN Foundation Communications.null; During her time here, Amy has led innovative communications strategies for several of our campaigns and initiatives including the award-winning Nothing But Nets campaign and our partnerships with AMERICAN IDOL and ABCnull;s Ugly Betty.null; She graduated from Penn State University with degrees in both Journalism and Political Science.null; Prior to the UN Foundation, Amy worked for several television and radio stations winning a Mark of Excellence Award for in-depth radio reporting from the Society of Professional Journalists.null; She was born and raised in Philadelphia, PA and enjoys spending time at her familynull;s beach house in New Jersey.null; Amy is also a new mom and has a renewed passion for life-changing work the UN Foundation does each day.Fun fact: Amy once flew a Goodyear blimp over the skies of Maryland

And the winner is…

Power of a Mom